Who Invented the Dumpster and Why Is It So Helpful for Waste Removal? 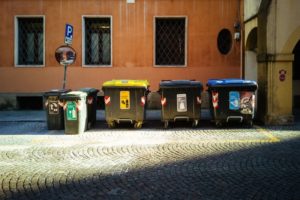 The creation of the dumpster led to the establishment of the first sanitation office that saw to keep all the streets clean and clear.

The dumpster is one of the top inventions of the 20th century, even though it’s been underrated for most of its existence. Without dumpsters, which George Dempster invented, the modern cities of the 21st century would be littered with heaps of garbage. If this were to have happened, countless epidemics could have started too, so waste removal is important. Until the 20th century, cities realized the adverse effects of roadside garbage on the public health system. The creation of the dumpster led to the establishment of the first sanitation office that saw to keep all the streets clean and clear. This invention had also led to the elimination of any labor-intensive horse-drawn carts used to collect garbage that is on the streets. Today, the Atlantic Waste Group offers the most modern dumpster rental service. Read on to learn more!

George Roby Dempster was the original inventor of the dumpster, while also the mayor of the city of Knoxville, who had a harrowing experience with hauling city waste through his construction business. He applied his extensive knowledge of heavy machinery to devise a more practical way of transporting, collecting, and disposing of waste, which is now known today as the dumpster. The first dumpster was then put into use back in 1935, and Mr. Dempster had the true intention of using it solely for his construction business, but all with the ordering of dumpster by his many competitors, Dempster then eventually abandoned his construction business to help produce dumpsters in significant quantities.

The Uniqueness and Importance of the Dumpster

The dumpster is an essential and unique item since it reduces the labor required in moving debris by up to 75%. For this very sole reason, you do not need sanitation workers to haul garbage, dirt, and other types of waste into a flatbed. With the invention of the dumpster, you need just one person to pick the dumpster up and haul everything away. The Dempster family also had a crucial invention in the 1950s, which is now today the modern garbage truck. The dumpster has become the first commercially successful front-loading garbage collector truck in the whole country. The truck was designed to eliminate the need for a driver to haul the dumpster away to a landfill. Today, a single truck can empty various dumpsters at the same time. This has increased the efficiency and speed of garbage collection around the globe.

Waste Removal and Transportation Services You Can Rely On

Atlantic Waste Group has satisfied both commercial and residential clients for years with our many waste removal and equipment transportation services. We provide clients with the reliable and quick services that they need at the drop of a hat! Our services are available to those living in the Anne Arundel, Baltimore, Prince Georges, Montgomery, Howard, and Carroll Counties in Maryland!

For more information about our services and a free online quote, visit our website and give us a call at (410)-768-4720! Our office hours are Monday – Friday, from 9:00 a.m. to 5:00 p.m. Our hours are very flexible throughout the week and weekend as well.

We use cookies on our website to give you the most relevant experience by remembering your preferences and repeat visits. By clicking “Accept All”, you consent to the use of ALL the cookies. However, you may visit "Cookie Settings" to provide a controlled consent.
Cookie SettingsAccept All
Manage consent

This website uses cookies to improve your experience while you navigate through the website. Out of these, the cookies that are categorized as necessary are stored on your browser as they are essential for the working of basic functionalities of the website. We also use third-party cookies that help us analyze and understand how you use this website. These cookies will be stored in your browser only with your consent. You also have the option to opt-out of these cookies. But opting out of some of these cookies may affect your browsing experience.
Necessary Always Enabled
Necessary cookies are absolutely essential for the website to function properly. These cookies ensure basic functionalities and security features of the website, anonymously.
Functional
Functional cookies help to perform certain functionalities like sharing the content of the website on social media platforms, collect feedbacks, and other third-party features.
Performance
Performance cookies are used to understand and analyze the key performance indexes of the website which helps in delivering a better user experience for the visitors.
Analytics
Analytical cookies are used to understand how visitors interact with the website. These cookies help provide information on metrics the number of visitors, bounce rate, traffic source, etc.
Advertisement
Advertisement cookies are used to provide visitors with relevant ads and marketing campaigns. These cookies track visitors across websites and collect information to provide customized ads.
Others
Other uncategorized cookies are those that are being analyzed and have not been classified into a category as yet.
SAVE & ACCEPT